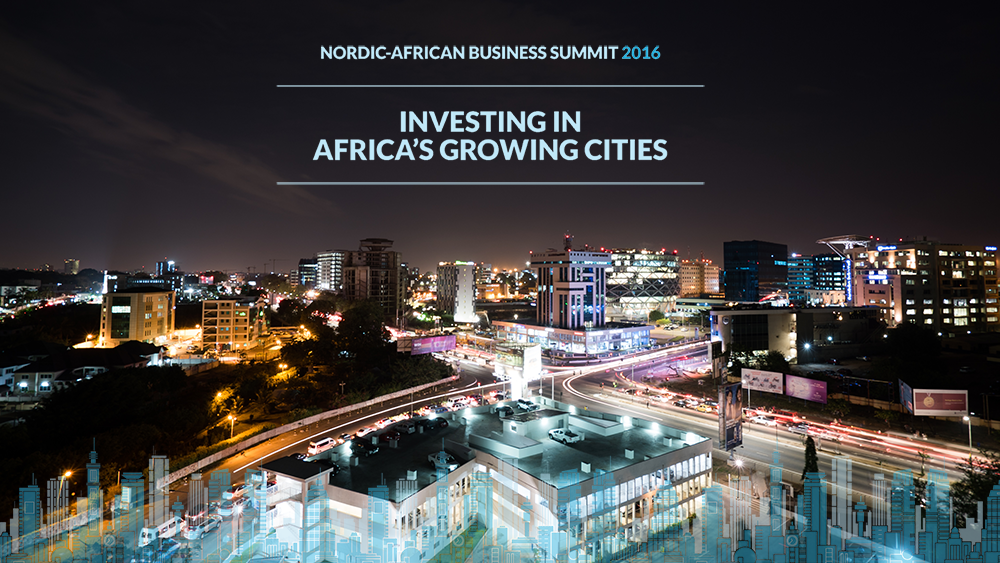 The Norwegian-African Business Association NABA is the most relevant network for Norwegian companies working in African markets. Their mission is to increase more efficient and less risky trade between Norway and Africa.

NABA holds an extensive public and private sector network on the continent, ready to assist companies, individuals and organisations when doing business in the African markets. NABA arranges seminars, conferences, workshops, and expert meetings in Norway and abroad and NABA membership gives access to information, knowledge transfer and strategic advice.

The annual Nordic-African Business Summit is the Nordic region’s leading business conference focusing exclusively on African markets. Since their first Summit in 2011, more than 300 speakers, and more than 3000 delegates, have made this conference the place to be for business people focusing on Africa.

Focussing on the continent’s fast growing cities, distinguished speakers shared insights and tools to navigate the many business opportunities this strong urbanization creates.

‘African Economies –What to expect from the cities: African Economy Outlook‘ was delivered by Mr. Henri-Bernard Solignac-Lecomte, Head of Africa Unit, OECD  followed by ‘A Conversation: From words to action, experiences from Kampala.’

With Africa being the world’s fastest urbanising region, and nearly 45 % of the population in West Africa being urban, the economic potential of this rapid urbanisation is evident, as the urban GDP was more than double that in the countryside in 2015. The session ‘Infrastructure, Construction and Real Estate in West Africa’ examined how these developments impact the infrastructure, real estate and construction sectors, and how domestic and foreign investors can benefit from this rapid urban expansion in West Africa.

The East African demand for energy is projected to more than double between now and 2040. Global agreements and advancements in technology means renewables are expected to account for a significant portion of this increase. This session ‘Renewable energy in East Africa’ highlighted opportunities presented by this transition.

With significant urban population growth, it leaves fewer farmers to meet the growing demand for food, indicating the need to produce more with less. The session ‘Food production for the Growing Cities’  gave greater understanding of investment prospects in food production, in addition to returns and impact of investment.