The Nubian pyramids of Sudan 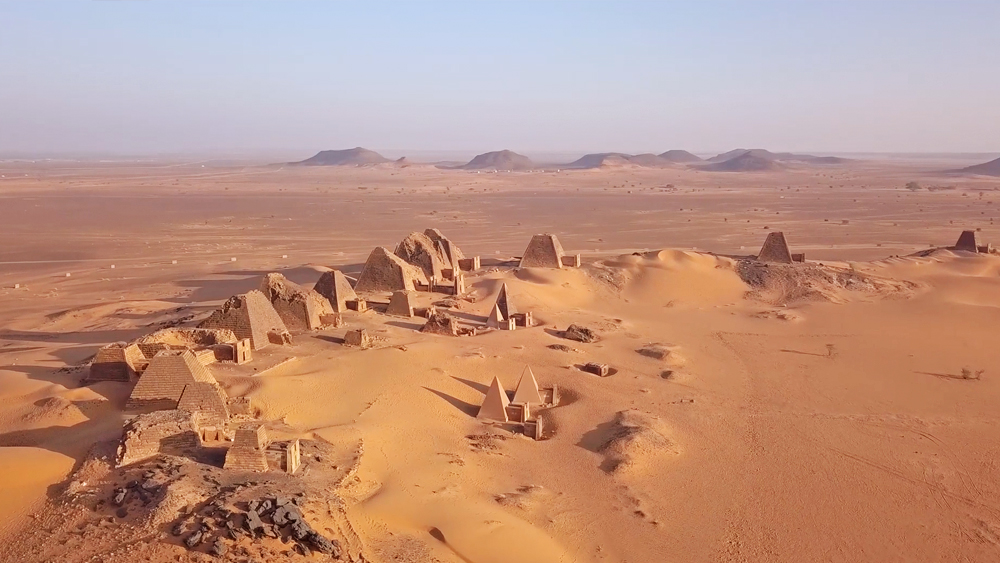 Explore the pyramids of Meroe

A collection of nearly 200 ancient pyramids stand along the banks of the Nile River in a desert in eastern Sudan. They have been the tombs of kings and queens, rulers of the Meroitic Kingdom for nearly 1000 years. Within the north of Sudan, in an area of the Nile valley known as Nubia. The Nubian pyramids of Sudan of Meroë were said to have been built by the rulers of these ancient Kushite kingdoms, known as the “black pharaohs”. The five Kushite pharaohs ruled Egypt from Nubia to the Mediterranean Sea from around 760 B.C. to 650 B.C.

The 35 pyramids grouped in five sites discovered in Sudan remain a huge attraction for Sudan’s tourists. The industry ravaged the effects of economic sanctions imposed throughout the country’s civil war and the conflict in Darfur. The country now receiving fewer than 15,000 tourists per year. This is only 10% of the numbers of tourists it received in the past.

Built of granite and sandstone, Nubian pyramids were built between 2,700 and 2,300 years ago. it has decorative elements from the cultures of Pharaonic Egypt, Greece, and Rome.

Although different in stature and build and created earlier than the famed Egyptian pyramids, Sudan has more ancient pyramids than Egypt. There are around 2000 Kushite pyramids in upper Sudan, compared with 200 Egyptian pyramids.

Showing the relationship between the African civilizations, the Kushite pyramids depict bilateral trade, movement of people and knowledge.

Kerma was Nubia’s first centralized state with its own indigenous architecture and burial traditions. Nubia’s Napata and Meroë kingdoms were influenced by ancient Egypt. While influenced culturally, economically, politically, and in matters of military, they also competed strongly with Egypt in these fields.

The first three sites are located around Napata in Lower Nubia, near the modern town of Karima. Fourteen pyramids were constructed for their renowned warrior queens. Later Napatan pyramids were sited at Nuri, the burial place of 21 kings and 52 queens and princes including Anlami and Aspelta. They were placed in huge granite sarcophagi, some lids alone weighing four tons. The oldest and largest pyramid at Nuri is that of the Napatan king and Twenty-fifth Dynasty pharaoh Taharqa.

In the 1830s Giuseppe Ferlini, an Italian soldier turned treasure hunter, raided and demolished over 40 Meroitic pyramids. Returning home, Ferlini tried to sell the treasure but nobody believed that such high quality jewellery could be made in Africa. Today these priceless treasures rest in the State Museum of Egyptian Art of Munich and the Egyptian Museum of Berlin.

About the Film Producer Thomas Markert – The Photoneer.de

Thomas Markert created this beautiful short film about the Nubian pyramids and temples of Sudan in Meroë. Through video he depicting his journey from Khartoum and the kind and generous people and photogenic camels he met along the way. Thomas gives us insight into these fascinating and mostly unknown treasures of the modern and ancient worlds.

Travelling became my hobby when I met my wife. Together, we visited many countries in Eastern and Southern Europe. When she was working in South Sudan our focus shifted to Africa. I realised that I had a wrong idea of these countries that are falsely known mostly for war, genocide and famine from the European media. The hospitality and kindness of people we’ve met, combined with the unspoiled nature sparked the desire in me to discover this continent that is highly misunderstood in my part of the world.