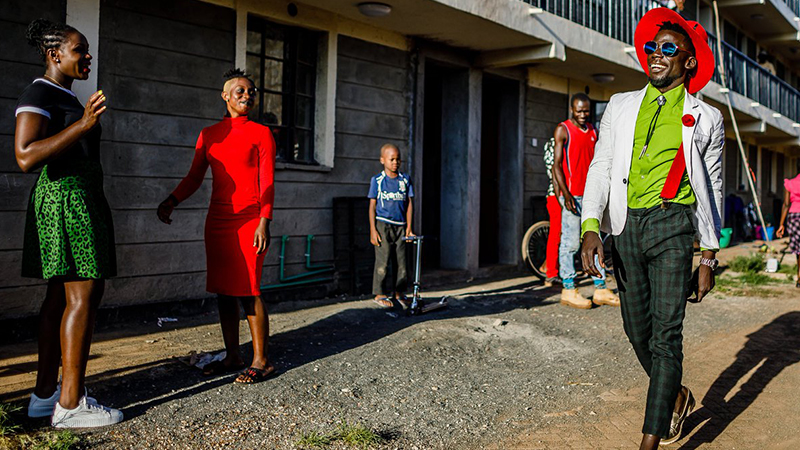 Picha Marangi Fashion Film by Nathan Collet is a winner of the best film award at the Bokeh SA International Fashion Film Festival.

‘Picha Marangi’ means ‘colourful picture’ and its protagonist is the unconventional Kenyan fashionista and photographer Stephen Okoth, whose fashion sense has made him a star.

Nathan Collett’s work focuses on those on the margins of society and on environmental issues,  and ‘Picha Marangi’ was filmed in Kibera in Kenya, Nairobi’s largest township.

Positive, hopeful, yet conservative, waiting as well. Happy as a new father as well.

I don’t think there is any perfection in the world 🙂 as they say perfect is the enemy of good enough 🙂 I think happiness is having enough to sustain yourself and your family, while having outlets for thought and creativity. The challenge is that ‘enough’ always expands with new challenges, technology, and such.

Complicated, it’s subjective to each person at some level. At another level it’s when it gets soo bad, mentally and physically… having good health is really important, and even though there is a lot of happiness in places like kibera, the daily grind and lack of health care can slowly take that away.

Hum. Hard, I try to adapt or consider my adaptation to reality or opportunities based on the feedback or challenges. I think probably just being more collaborative, finding a way to get things done with less friction, less conflict.

Results, without too much chaos or aggression. Being ‘peaceful’ but accomplishing nothing is relatively easy. Being peaceful and yet successful and accomplished is admirable. Those that achieve success, make the sacrifice for creative success, through luck and hard work and not being ‘negative’… very few seem to get there…

Lack of awareness or fairness… rich or poor or middle class is not always the indicator, often it spans class and opportunity. Those that think stepping over others is important to get ahead. Challenging others is okay, taking from others is misguided yet often successful.

I don’t like liars. The worst I do is withhold information, keep silent.

No favourite really, so many journeys in life…I don’t really believe is best or favourite, each has its own value… in general my best journeys have been in East and Southern Africa, but no favourite all have been good / bad / and or amazing in their own way.

Inspired by his aesthetic, I know him personally and thought it was a good message.

Inspired by it, very visual and unique in use of used clothes.

Kibera and Gikomba are different areas and many kilometres apart. One is a shanty town / slum where hundreds of thousands live in a tiny area yet with a sense of community and kindness despite the bad conditions. I’ve been working on and off there since 2006 when I directed the award winning short film Kibera Kid. I used to run a film school there but now it’s on hiatus due to funding and now covid so may not come back at this point. Gikomba is a huge open air market where much of the used clothes can be found. The market I show in the short film is in Kibera… even though the main market where they come from is Gikomba.

The first shoot day was really cool, and inspiring, wanted to finish all in one day but had some production challenges.

Some of the people who were meant to help us didn’t show up, came late, and we missed the final shots, as well some small harassment from police officers slowed down the process and we missed the light. We had to come back for a second day, and that presented challenges organising and finding the unique props etc.

Wanted Stephen to do it, but for a few challenges and his own reluctance I found someone online to do it for me, as well with the music.

I filmed, worked, and studied there for over a decade until recently. My wife is Kenyan and I have had a lifelong interest in Kenya and East Africa.

Don’t really have heroes in fiction.

I like artists like Basquiat, actors like Peter Fonda, Jack Nicholson of the 60s/70s and writers like Peter Carey from Australia or film directors like Terrence Malick. People who kept / keep a level of authenticity, truthfulness. I won’t call them heroes, just more like inspirations. I dont have heroes or I don’t really believe in heroes or both.