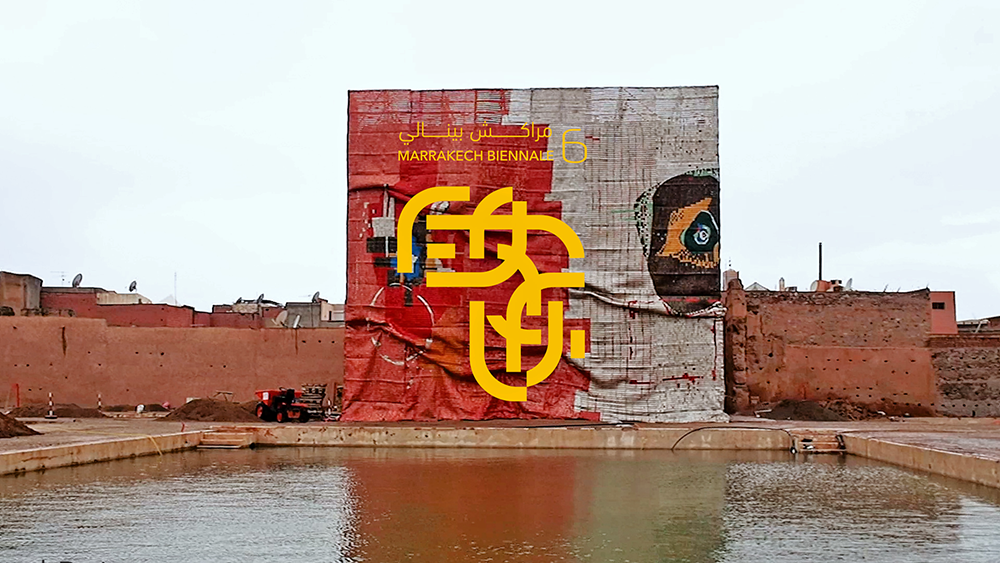 It’s a theme of our times, and I find the arts a peaceful yet powerful way to assist a people in finding their critical voice, an amazing vehicle to confront big issues without it being personal.

Marrakech, the ‘Red City’,  is a melting pot of sights, sounds, culture and culinary experiences, as a journey through it’s gardens, souks and palaces will reveal.  The city is also home to the Marrakech Biennale, named one of the world´s 20 best biennales.

With a long history of contribution to the arts, Vanessa Branson, with Abel Damoussi and with the help of curator Danny Moynihan and Liberatum creator Pablo Ganguli, set up the Arts festival in Marrakech(AIM), now known the Marrakech Biennale, in 2005.

The biennale is a not for profit organisation set up to establish Marrakech as a platform for contemporary art in Africa, the Middle East and the Mediterranean region. With a mission to build bridges between cultures and promote dialogue through artistic expression and contemporary art, the biennale is North Africa’s only trilingual arts festival, featuring English, Arabic & French, and Vanessa was the President and Founder.

We chatted to Vanessa about her journey as a passionate curator of contemporary art in London to founding the Marrakech Biennale and its contribution in establishing Marrakech as an eclectic and diverse platform for the arts, against the backdrop of the period characterised by George Bush’s ‘ for us or against us’ speeches in the media, and the fear of the rest of Europe wanting to follow what he was saying.

Witnessing the lack of nuance and understanding about the situation and having worked in the arts all my life, I thought it good to have an art event in Morocco to serve as a platform for debating ideas. Someone once said that a museum is a safe place to discuss dangerous ideas.

IA: What was your vision for the Marrakech Biennale?

IA: Do you believe art is activism and can play a role in creating dialogue and integrating diversity?

VB: ‘I believe in all those things and I believe it does more. We all fundamentally have the same needs and beliefs in life and whatever our background, we feel overwhelming love for our children and families and communities, and there’s very little difference in this between cultures. It can be hard to have a functioning democracy if you haven’t learned the language of expressing yourself and if you disagree with something, to not be able to explore and discuss why you disagree with it, because you haven’t learned the language for it. The Arts can play a role in developing critical thinking. It’s been a new revelation for me. If that’s activism I’m not sure. It can be very exciting for young people if they can find a voice through the arts.’

IA: What does the MB6 theme ‘Not New Now’ mean to you?

VB:  ‘As with all good themes, the artist can translate it to their own vision to tell their own story. It’s a complex theme, it’s not at all obvious. What’s interesting here is there has been such a focus on folkloric art and looking to the past. A country confident about its future will see that reflected in their cultural output as well. The curatorial theme also seems to be questioning the trend that something isn’t interesting unless its new. And art always references the past and where are we now.’

IA: How does MB6 resonate with Morocco in the context of its focus on Sustainability?

VB: ‘Morocco is an extraordinary country and it’s the most exciting country I’m spending time in right now. They are at the vanguard of projects such as solar power and a permaculture revolution is happening here and people are embracing it. The art industry is atrocious in the way it crashes through the planet with everything wrapped in bubble wrap, crated and flown. There is so much packaging flown in and flown out. I shipped work out here and we used the crates for ironing boards- all crates were re-used. We bring artists over here, and they respond to Marrakech. They can choose to work with an astonishing array of talent and craftsmanship here and often with materials found here. The work is created here so we don’t have to fly in and ship it and so we think we may be the greenest biennale in the world! ‘

‘It is also the only trilingual arts and culture festival in North Africa and we include music, literature and film, because it all ties together. Naturally, art has no borders hence crossing- over makes sense. Out here it particularly resonates because of the conflict of old and new and because of the different cultures. Culture here has been about performance, so we´re bringing performance and the arts to people in the street. We have a very good film school and do good work with lots of students. And then there’s the music. You can’t have a festival without great music.’

IA: Can the Arts be an economic driver and create great business?

VB: ‘It´s very apparent here as we started with a blank canvas really. There is a difference between heritage and culture. There was huge heritage here, because of historical events, which took place, and there´s wonderful architecture, music and crafts. But not so much of it was contemporary and looking forward, so I can see it and I can feel the role of the arts as an economic driver here.  We’ve had economic impact studies done on different biennales around the world and discovered that an investment of every million euros into an arts festival can generate ten-fold revenue, from visitors spending their money there. It’s known for the effect on young designers feeling they have an audience when selling their goods in little pop- up stores and design boutiques. Restaurants become a bit more ambitious and feel more confident. Architecture becomes more interesting if stimulated and it becomes a virtuous circle with interest upon interest. And if you have a city of contemporary cultural significance that is changing and evolving, people come back and again and again. And one of the greatest rewards for me, for example, has been that the interns now have permanent positions with the

IA: You spoke of evolution and transformation?

VB: ‘ It’s nonsense, all these things about building walls, we’ve all got to work together, and I have to communicate a message that’s practical and one that’s grounded in reality, borne of experience and that people feel inspired by. If we’re going to make cultural differences, they need to work through on a generational time frame and not look for a three-year time frame. I´m also nervous about people feeling that because of this rush of technology and feeling that the world is changing so quickly, that we need to make changes quickly.  This is the message I´d like to give: To make systemic change, it needs to evolve, you can’t just impose it.  And if I can get this message cohesively across, perhaps I will have done a good job.’

IA: What scares you in the world?

VB: ‘Real ignorance is a threat. Other people’s fear, based on ignorance, is probably the thing that frightens me the most. ‘

IA: How do you conquer your fear and move through challenges ?

VB: ‘It’s easy to give advice and not live it yourself but it’s important to try to keep a sense of humour. I don’t want to mess it up, that’s a great driver! I want to do what I do well and leave behind a trail of happiness. One can’t always do that but it’s rewarding to see the trail of my life. My mum, at age 92, says you live for an awfully long time and there’s a lot to do, yet! ‘