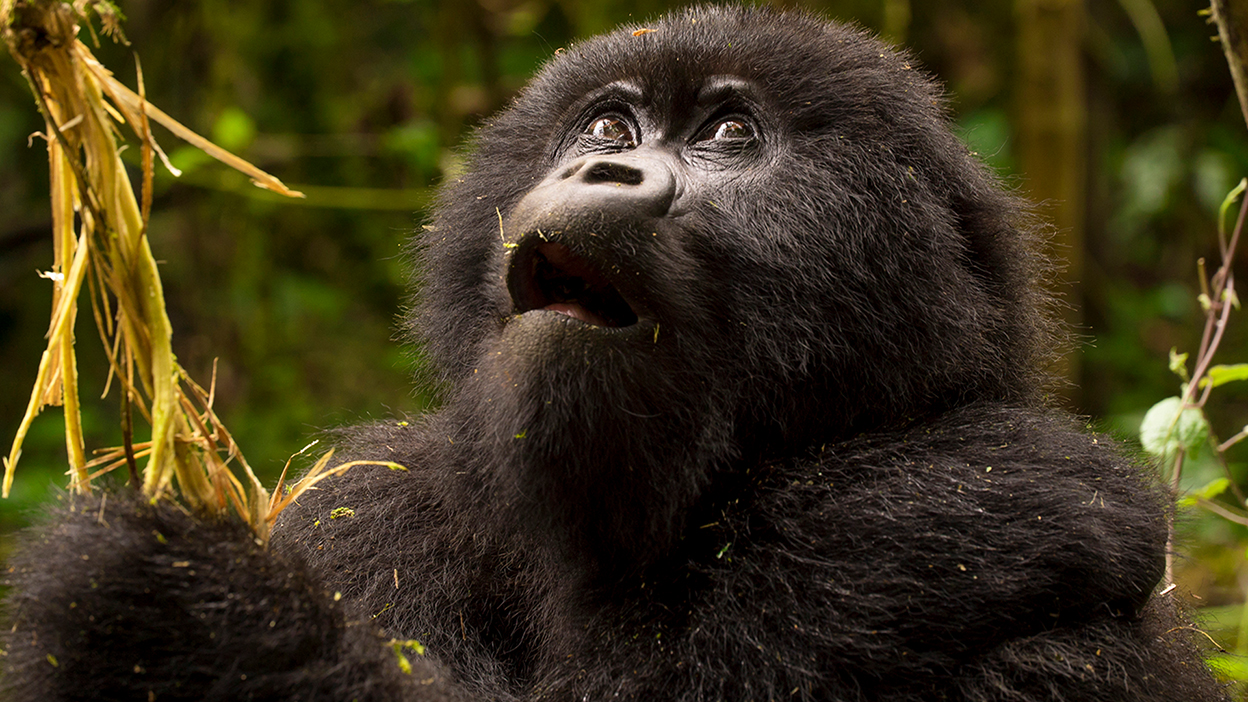 Today nearly half of the remaining just over 1000 mountain gorillas, the world’s most endangered ape, are found only in small portions of protected forests in northwest Rwanda, southwest Uganda, and eastern DRC, in Volcanoes National Park, Bwindi National Park and Virunga National Park, respectively. Experience the magnificent Mountain Gorillas of Rwanda with Intro Africa.

Since being discovered early in the nineteenth century, mountain Gorillas started declining heavily in numbers, attributed to amongst others, loss of habitat, hunting, war and capture for the illegal pet trade, but mountain gorillas can only survive in the wild and today they are enlisted as critically endangered.

The reason we are not advocating for mass tourism is because Rwanda is very small but we also have to protect it if we have to still have the endangered species in fifty years to come.

Volcanoes National Park shelters 5 of the 8 volcanoes of the Virunga mountains and also became the research base of the species’ greatest champion, Dian Fossey.

Gorillas are usually found in families of up to 30, led by one dominant adult male, called a silverback because of the silver hair adorning his dark fur, and young males, females and baby gorillas.

During our trekk in Volcanoes National Park in Rwanda, we encountered the Agashya family.

There are few experiences on this earth as awe-inspiring as meeting the gorillas for the first time, a fully-grown silverback gorilla weighing in at up to three times human size.

Yet they are remarkably human-like and watching baby gorillas swing around and having fun is akin to watching human children at play.

Rwanda has put in place solid measures to protect their mountain gorillas, such as increasing the price to visit the gorillas in support of a long-term ecological approach to conserve them, and even creating a world- famous baby gorilla-naming ceremony to create awareness around this valuable national treasure.

Trekking is allowed in small groups to visit the gorillas, for only up to one hour at a time, no touching is allowed and noon is cut- off time for visits, to give the gorillas privacy and time to relax without human intrusion.

Once rangers locate a gorilla family, guests trek through the mountains to the location, but must be invited in by the gorillas before entering their space. This occurs through a series of grunts, calls and barks by the rangers, which guests are encouraged to emulate and only once the gorillas feel you are not a threat to their families, which they communicate through an approving bark, you can enter.

While gorillas still face threats from habitat loss and poaching, committed conservation initiatives and education programmes turning poachers into protectors and advocates for conservation, mean their numbers are steadily increasing from 620 individuals in 1989 to approximately 1000 individuals today.

With funds generated from the sale of gorilla trekking permits used for managing the Parks and a percentage of Park entrance fees donated to local communities living around the parks,

they are becoming an important source of income for the local economy through tourism.

To quote Anny Batamuriza, CEO New Dawn Associates and Vice Chairperson of Rwanda Tourism Chamber, ‘Come and trek the magnificent Mountain Gorillas of Rwanda, come to Rwanda and visit the Big Five, come to Rwanda and see the land of a Thousand Hills because that is where the opportunity is.’